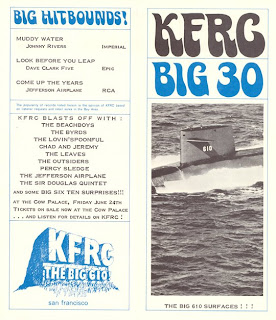 This KFRC Radio 610 San Francisco, California top 30 survey from May 25, 1966 is issue number one. The Big 610 surfaces. Looking at the top 30 chart we find "Paint It, Black" by The Rolling Stones as the number one song for the week. Neil Diamond is at number 9 with "Solitary Man" which only reached number 55 on the Billboard charts in 1966. Neil Diamond fans know this charted again in 1970 reaching number 21 on the Billboard charts. Northridge group The Leaves are at number 14 with "Hey Joe." "Gloria" by Them rounds out the top 30. 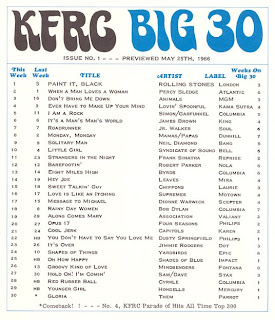 Posted by John In Montana at 1:21 PM No comments: 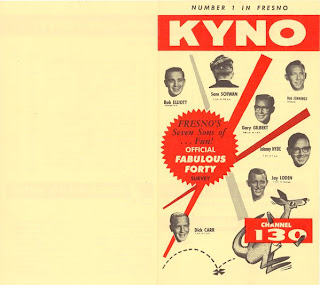 The October 20, 1962 KYNO Radio 1300 Fresno, California survey features DJs Bob Elliott, Sam Schwan, Bob Jennings, Gary Gilbert, Johnny Hyde, Jay Loden, and Dick Carr. The Fabulous Forty chart has "Big Girls Don't Cry" by The Four Seasons as the number one song for the week. The number 7 song, "Peepin' And Hiding" by Court Victors was not a top 40 tune on the Billboard charts. Johnny Crawford is at number 23 with "Rumors." Johnny played "Mark McCain" on "The Rifleman" TV series. We find "My Three Sons" "Chip Douglas," Stanley Livingston at number 25 with his "Hairspray" song, also not a Billboard top 40 hit. At number 37 we have "Don't Go Near The Indians" by Rex Allen. Rex was the narrator for numerous Walt Disney documentaries in the '60s and had his own TV series in 1954, "Frontier Doctor." Of course there are quite a few songs on this survey that are quite well remembered from that era. KYNO was the number one station in Fresno in the '50s, '60s, and '70s when owned by Eugene Chenault. They were a test market for the "Boss Radio" format which was later used on such stations as KHJ in Los Angeles. 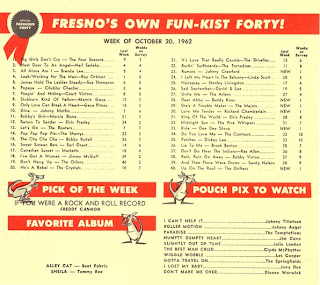 Posted by John In Montana at 1:31 PM No comments:

The May 16, 1966 survey from KOOK Radio 970 Billings, Montana features DJs Michael B. Anthony, Wayne Coffey, Tom Reed, Major Dan Miller, and Carl Mann. Carl went on to KOMA 1520 Oklahoma City from KOOK. Carl can be currently heard nationwide on the Oldies Plus Network. The All Heart survey from the Home of the Happy Hearts top 29 chart has "When A Man Loves A Woman" by Percy Sledge. The number 7 song, "The Ballad Of Irving" was a parody of "Ringo" by Lorne Greene. The artist, Frank Gallop was best known as the announcer on the 1950's Perry Como TV shows. The number 15 song, "Younger Girl" by the Hondells wasn't a top 40 song on the Billboard charts. At number 29 we find "Peter Rabbit" by Dee Jay and the Runaways, a group out of Iowa. It is interesting to note that all of the locations mentioned at the bottom of the survey are no longer in business.
Posted by John In Montana at 1:33 PM No comments: 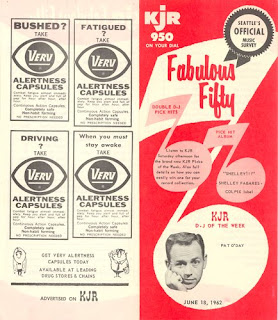 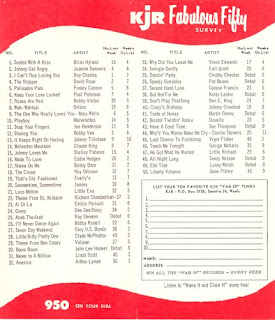 Posted by John In Montana at 9:05 PM No comments: The November 14, 1955 top 40 music chart from radio station KTOP 1490 Topeka, Kansas is the oldest in my collection of radio station surveys. The number one song for the week was "Sixteen Tons" by Tennessee Ernie Ford. "Sixteen Tons" was a Billboard number one song for 8 weeks and was on the charts for 19 weeks. The number 16 song, "Pepper-Hot Baby" was a hit for Jaye P. Morgan who might be best remembered as a regular on "The Gong Show" television game show. While KTOP is still on the air in Topeka, they are no longer a top 40 music facility. The current format is sports using the ESPN network.
Posted by John In Montana at 11:33 AM No comments:

A recent visit to Las Vegas reminded me of some old photos I had taken in 1969. First we have a look Fremont Street: 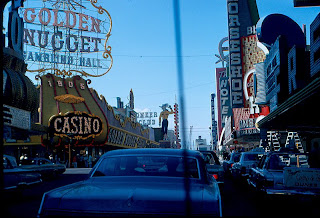 A look down the strip shows the Silver Slipper still in business: 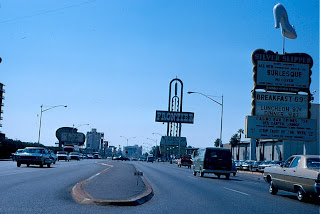 It's fun to look back, but one wonders what Las Vegas will look like 40 years from now.
Posted by John In Montana at 1:39 PM No comments: 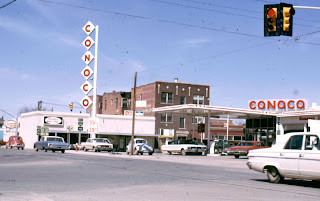 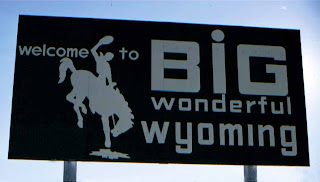 Back in the 1960's when you drove to Wyoming you would see this Welcome to Big Wonderful Wyoming sign. These signs were replaced, but it's fun to remember that way it was.
Posted by John In Montana at 8:34 PM No comments: